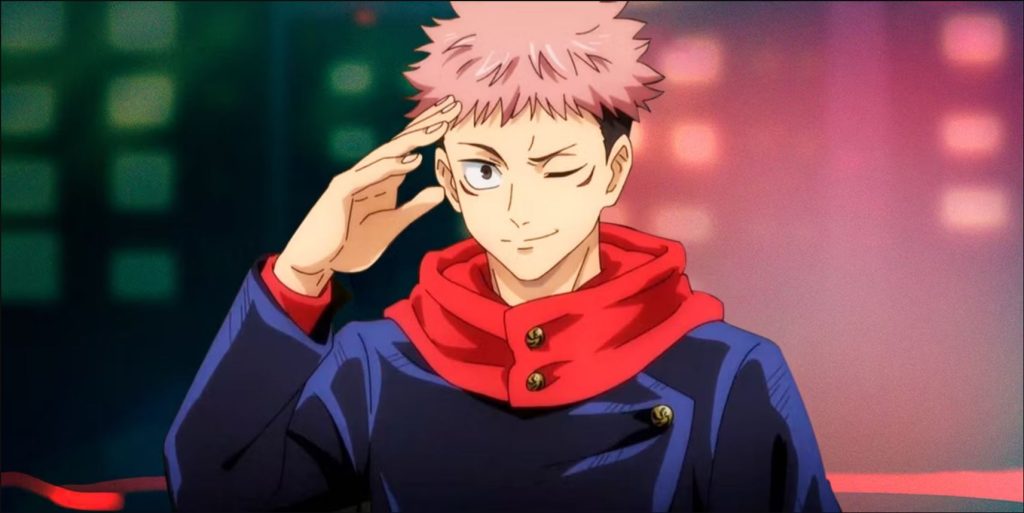 Lots of anime series are gaining popularity over the years, but one, in particular, continues to stand out and that’s Jujutsu Kaisen.

This anime is another example of a popular manga or comic series that received an anime adaptation.

According to the Jujutsu Kaisen wiki, the adaptation was announced on November 25th, 2019. The success followed immediately after its release due to its charismatic characters, starting with the main protagonist, Yuji Itadori. The other characters in Jujutsu Kaisen include Gojo Satoru, Megumi Fushiguro, Kento Nanami, Yuta Okkotsu, and Toge Inumaki.

Who is Yuji Itadori of Jujutsu Kaisen?

Yuji Itadori is the main character of the dark fantasy anime series Jujutsu Kaisen. He is a high school student who is generally carefree and easygoing. Although he is a track and field athlete, Yuji has zero interest in running around in circles for the sake of competition.

Yuji is a teenage boy who attends Jujutsu High School. He is average height, with light brown eyes and undercut spiky pink hair.

Like every student at Jujutsu High, Yuji wears a custom uniform. The uniform is a black long-sleeve shirt with a red hood and black pants. He also wears red shoes.

Even though he is quite content in his role as a club member, Yuji’s life takes a drastic turn when real spirits begin showing up at his school. Yuji’s development as a character started after his grandfather died. To honor his grandfather’s dying wish, Wasuke Itadori, Yuji decides to become a kind and fair person to help preserve human life.

There were some revelations about Yuji’s family. The Shibuya Incident dropped hints about the family. At this point, Choso revealed that Yuji Itadori was his brother. But it did not appear that Yuji was part of the Kamo family. Chapter 143 showed a glimpse of a woman who was supposedly Yuji’s mother.

When Yuji Itadori was introduced into the story, his grandfather was his only living relative. His conversation with his grandfather revealed that Yuji never knew his parents. His grandfather, the only person in Yuji’s life who could remember anything about his parents, decided to tell him everything there was to know about his parents before he passed away. But the strange thing is that even he did not know much about their whereabouts.

Yuji Itadori’s grandfather tried to talk about his parents. While he was unable to tell Yuji, the identity was later revealed as the Brain or Kenajaku. The woman had stitches on her forehead, similar to Geto Suguru and Noritoshi Kamo. This revelation sent shockwaves throughout the Jujutsu Kaisen fandom, as many fans had previously theorized that Yuji’s mother might be the Brain.

Many theories emerged to explain this unexpected twist. Some fans speculated that the Brain had possessed Yuji’s mother since her youth, and others believed that she may have been the Brain and somehow died while still possessing the body.

Whatever it may be, this reveal is certainly shocking. The implications of the connection between Yuji’s mother and the Brain are far-reaching; it shows more about her mysterious past.

Jin Itadori was Yuji Itadori’s father. Jin was a tall man with light eyes and short hair. He wore glasses, black pants, and a light-colored shirt. He had a very close relationship with Yuji and deeply loved the boy.

Jin was devastated when his wife Kaori died, leaving him to care for their newborn son alone. A flashback showed Jin holding baby Yuji while talking with his father, Wasuke.

Wasuke mentioned that Jin wanted to have a child with Kaori. But before he could talk about her death, a woman interrupted him and asked what he was talking about. The woman, who had stitches on her forehead, called Wasuke father-in-law.

Yuji Itadori is already a powerful human being. He possessed superhuman strength that made him capable of lifting and throwing a car. He also has enhanced speed and reflexes, allowing him to complete a 50-meter run within three seconds. He also dodged attacks from five sorcerers from a rival school who tried to kill him. His speed even allowed him to evade the piercing blood technique of Choso.

Yuji also has enhanced durability and stamina. His durability is better than an average sorcerer. He was able to withstand attacks from Choso and Mahito. His enhanced stamina allows him to continue fighting even after severe injuries. He also helped Megumi escape while fighting the Finger Bearer, even though his fingers had already disintegrated. Additionally, Yuji’s stamina can protect him from poisonous stab wounds.

Jujutsu sorcerers receive training and are employed to defend humanity from cursed spirits. These sorcerers are also known as Jujutsu-shi and wield various skills and abilities to fight against these creatures. A Jujutsu sorcerer fights curses and exorcises them.

Yuji Itadori is a powerful sorcerer in the Jujutsu world. He has several Jujutsu sorcery powers that allow him to defeat stronger-than-average cursed spirits.

Yuji possesses cursed energy that can damage or even destroy someone or something. His cursed energy comes from Ryomen Sukuna JJK, a cursed spirit. While Yuji does not possess an innate technique, he learned to control the cursed energy with excellent proficiency.

He combines these cursed techniques with his superhuman abilities and martial arts skills. This combination increases the impact of his strikes and helps defeat curses.

Yuji Itadori developed the Divergent Fist as a punch that uses cursed energy manipulation. The main property of this is that the fists can repel attacks by simply making a fist. Even though he developed the Divergent Fist technique, Yuji stopped using it after fighting Aoi Todo during a Goodwill Event. Aoi told him that the technique would not allow him to deal with a special grade.

The apparent death of Yuji Itadori during the cursed womb arc gave the King of Curses a chance to create a Binding Vow with the boy. Sukuna agreed to revive Yuji under two conditions.

Yuji Itadori initially refused the agreement and made Sukuna vow that he would not hurt or kill anyone during the whole minute he controlled the body. Itadori continued to oppose the idea and battled with the cursed spirit but was ultimately defeated. So, he was forced into the Binding Vow.

While Itadori is not evil, he has an evil entity living inside him. Sukuna has limitless power and can use Itadori’s body for sixty seconds. During the switch, Sukuna can destroy a city if he wants to, and Itadori is not himself.

His personality changes entirely to match that of Sukuna’s, though he does not have the knowledge or memories of when Sukuna is controlling Itadori’s body. He becomes violent and aggressive, with an insatiable taste for destruction and violence. Powerful Cursed Spirits and Jujutsu Sorcerers cannot stop him except Gojo.

Written by Gege Akuzami, Jujutsu Kaisen follows Yuji Itadori’s life and takes a unique path when he discovers his latent abilities as a Jujutsu Sorcerer.

PrevPreviousIs a Masters in Graphic Design Worth It?
NextEverything You Want to Know About Megumi FushiguroNext