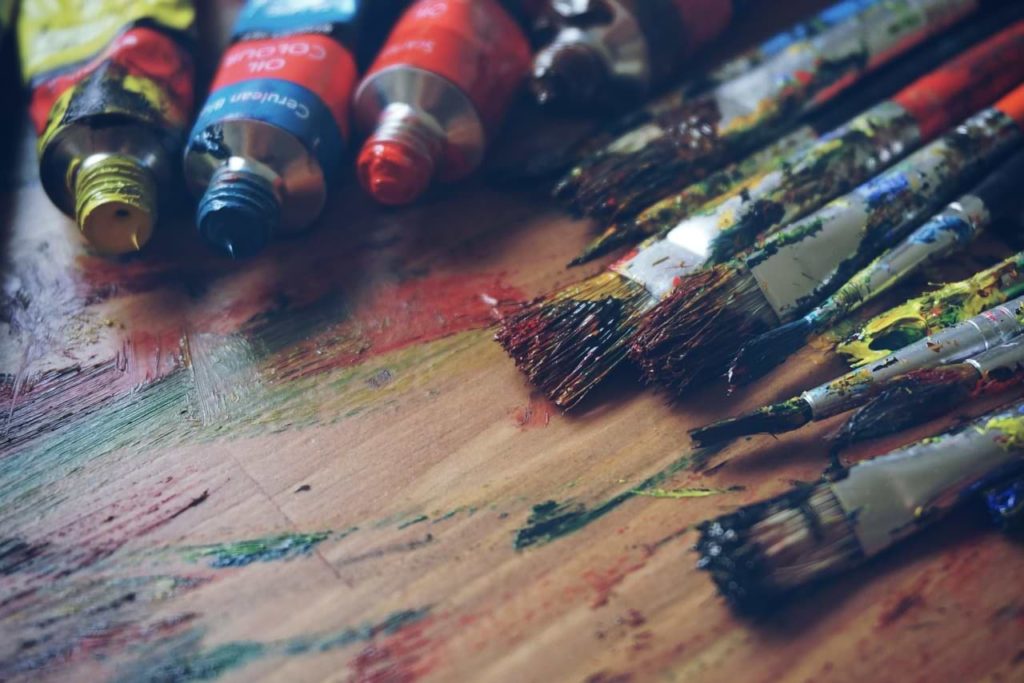 For painters both experienced and new, using oil paint on canvas really makes you feel like a true master, and it makes sense: there’s just something about oil paints when its placed on canvas that just seems right. Everything about the pair makes sense; from the way the paint feels when it’s brushed across the surface to the vibrancy it adds to any subject, oil paint on canvas simply has no equal (maybe acrylic, but IMHO it comes as a distant second, gouache on canvas coming in at an even more distant third).

Yes, oil paint can be difficult to mix and tricky to apply, but with the right technique, the proper tools, and a dash of creativity, applying oil paint on canvas is going to make you feel like a Renaissance man, not to mention bring out the best in whatever you’re painting. But first…

What is Oil Paint?

When artists use the term ‘oil paint’, they mean a type of paint that uses a combination of binder, pigment, and thinner. In this case, the binder, that is, the liquid where the color element (or pigment) is suspended in, is in the form of an oil, often linseed. The pigment is what gives the paint color and is usually made up of a dry, solid substance that is turned into powder and mixed into the binder.

When the oil and color are mixed, a thick, viscous, syrupy like substance is created. To this, a thinner is applied so that it becomes runnier and easy to apply to surfaces. Turpentine is usually used in modern-day oil paints because its consistency allows the pigment and the binder to spread out more smoothly and evenly, particularly on canvas. Turpentine also helps the oil dry faster, thanks to a chemical process called oxidation.

Unlike other types of paint, like watercolor, tempera, gouache, or acrylic, oil paints dry via oxidation. The other paints dry via evaporation, wherein the binder turns into vapor, leaving the pigment behind. Through oxidation, the oil binder reacts with the oxygen which turns into a gel-like substance, eventually becoming hard. This is in contrast to other types of paints, like spray paint on canvas, which isn’t as hardy as oil paints

Linseed oil is the preferred choice of binder specifically because it dries via oxidation, which is in contrast to other types of vegetable oil like canola or olive. However, other types of oil, like walnut, safflower, or poppy seed are also popular because of their specific drying times, sheen, and other effects that a painter might look for. Linseed oil, however, is more popular because of its versatility: it can take on the effects of other types of oil through reworks and particular types of mixing and is the fastest drying oil of its kind. Of course, drying times will still depend on the type of pigment used (different colors dry at different rates because of their physical properties), but in general, linseed oil is still the fastest one to oxidate.

The History of Oil Paints

No one is exactly sure when or who invented oil paints, but we do know that it has been used pretty much since Mankind started exploring their artistic side. In various grottos and caves in Southern Europe, the Middle East, the Indian Sub-continent, and China, archaeologists are discovering cave paintings made with a primitive type of oil painting consisting of animal fat and dirt. Early cavemen would use this mixture to paint depictions of caveman times, from the pictographic representation of animals and people to simplistic scenes of hunting and everyday life.

For a long time, painters would use different types of animal fats and pigments to create rudimentary oil paints; however, in the 15th century, Dutch master Jan Van Eyck discovered that Linseed oil, along with a combination of other types of nut oil, produced the most vibrant, and more importantly, the most consistent results. Over time, other artists across the European continent started experimenting with their own blends of oils, with each type of oil creating a different effect. This meant that each artist needed to mix their paint by hand, with each batch being made fresh on the day the painter needed them.

In fact, mixing paint was one of the first steps to becoming a master painter: apprentices would first familiarize themselves with a master painters atelier or workspace, learning both drawing and paint mixing. In fact, for a journeyman to become a master, he must be able to display both his painting skills with his signature paint before his peers could recognize him as a fellow master. However, by the 19th century, the Industrial Revolution gave rise to mass production and manufacturing techniques that allowed paint mixers to create lines of oil paints specifically for fine arts.

Nowadays, paint mixing is still a skill that many Art schools teach students; however, paint mixing was both time-consuming and inconsistent. This is because the wrong ratio of pigment to the binder to thinner can result in a paint that is either too dull, or too runny, or too goopy, or something that doesn’t dry correctly, among other consequences. Modern Art schools will have absolutely no trouble using pre-mixed and commercially available oil paints.

Why Use Oil Paint on Canvas?

Oil paint is popular not just because Renaissance and Continental European masters like Da Vinci, Raphael, Van Eyck, Rembrandt, or Caravaggio (to name a few) preferred it, it’s also because oil paints have stood the test of time, with many oil paintings from the 15th century still retaining their vibrant colors, smooth brush strokes, and durability of the dried paint.

In terms of versatility, oil paints had more versatility than acrylic or gouache: depending on the needs of the artist, oil paints are much easier to thin out, make more vibrant, dull the color, or make it opaque. Because of their slow drying times, wherein the colors do not change into different shades (like, say, watercolor or spray), artists can revise their work should they make a mistake.

Oil paint on canvas is also easier to remove than other mediums, which means that painters can continually rework or edit their paintings when they see fit, allowing for greater flexibility and, despite the difficulty of mastering it, is a lot more forgiving in the long run than other types of paint.